Zombie Jake makes his appearance in the episode "From Bad to Worse," when Jake is bit by Candy Zombies. After turning into a zombie, he bites Lady Rainicorn, and proceeds with trying to bite Finn. Zombie Jake is the first to be cured by Science the Rat's Decorpsinator Serum, but quickly turns back into a zombie after the other Candy Zombies realize that Jake was no longer a zombie.

Zombie Jake makes another appearance in the online game "Rhythm Heroes," in the level "Henchman." You play this level the same as you do with Zombie Finn, except with a higher difficulty. Before playing this level, you must first beat the first three levels in the game with Finn to unlock Jake, then beat the first two levels again with Jake. 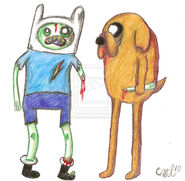