They made their first appearance in the episode "Tree Trunks," where a worm tried to eat an apple. Then they appeared in the episode "Evicted!," where one was on Finn's bed but Finn pushed it away. Later in the episode, after Marceline left Finn and Jake's house, many worms were found in the house. A huge worm that could speak and wore a crown came up to Finn and Jake asking them if they could hug him. He then used some kind of mind-control power to make them hug him. They appeared again in "King Worm," where they attempted to steal Finn and Jake's life energy. 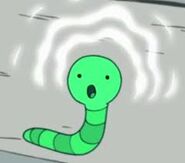