Wormo is a character that appeared in the episode "Apple Thief." He is a part of Jaybird's gang and guards their headquarters. He was first seen when Finn, Jake and Tree Trunks were trying to get into the gang's hideout, and Wormo let them in because Jake made a fake ring with his stretchy powers. Once in the hideout, Wormo shows them the "apples" that Tree Trunks was looking for, but they turn out to be diamonds. The other members of the Jaybird's gang come into the room and capture them. It then shows Wormo, who chooses to feed the captives to the Pig, but another gang comes into the room and both gangs fight each other. Wormo is included in that fight. After "Apple Thief," Wormo has not appeared at all on Adventure Time.

Wormo is long and multi colored worm. His colors are yellow, green, red and blue. His face is simple, like most characters. 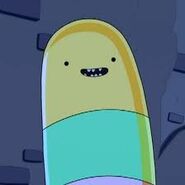