This is for the character. For the episode, click here.

Worm King is the King of Worms. He made his first appearance in "Evicted!," where he is seen blasting Finn and Jake with a kind of ray. He reappears in "King Worm," where he attempts to drain Finn and Jake's life force, but withers up when Finn shatters the dream. It is unknown where he is now.

He is a long, tall worm with turquoise green stripes, and a small, golden crown on his head. 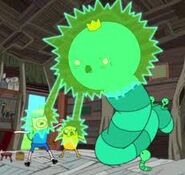 Add a photo to this gallery
Retrieved from "https://adventuretimesuperfans.fandom.com/wiki/Worm_King?oldid=31903"
Community content is available under CC-BY-SA unless otherwise noted.