The Wizard Robe is a robe that is given to the students of BUFO in the Wizard Academy. They were seen in the episode "Wizard." The robe gets stars as the user finishes challenges by BUFO. A huge star can be earned to whoever finishes the final challenge, though, it replaces all the other stars on the robe. This star will make the student become the "Ultimate Wizard." Finn has earned the last star, but Jake didn't, because he said that he had every power he needed.

The robe is very long and baggy, Finn tucked his in because he considered it to look like a dress. It is a purple/maroon color and it magically gains stars after finishing a challenge. 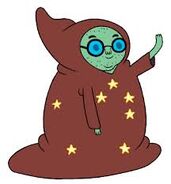