Wildberry Princess is "small and plump" and has a high pitched voice. She is one of the most common minor Princesses in Adventure Time and is often targeted by the Ice King. She plays a prominent role in the episode "Jake vs. Me-Mow," as she is targeted by the Guild of Assassins for Me-Mow's test of full admittance into the guild. She is the opposite of a vegetarian and only eats meat. Wildberry Princess also has a medical condition that causes her to lose all the berries on her body, but not the one in the center. She is also mentioned in "Hot To The Touch," where she is mentioned by Jake as a girlfriend for Finn.

She is a plant made up of many red and pink berries. She has a stem and a leaf on the top of her head with a crown. He arms and legs are very thin and green. Her face is shaped like a heart and has a simple design like most characters. 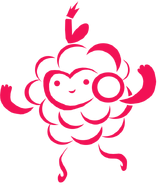 Add a photo to this gallery
Retrieved from "https://adventuretimesuperfans.fandom.com/wiki/Wildberry_Princess?oldid=31937"
Community content is available under CC-BY-SA unless otherwise noted.