The Wildberry Kingdom is a kingdom in the Land of Ooo, ruled by Wildberry Princess. It made its first and only appearance in the episode "Jake vs. Me-Mow," when Finn and Jake went there to protect Wildberry Princess from the assassin, Me-Mow. It is later seen again in Princess Monster Wife, where Widberry Princess complained on her missing arm. 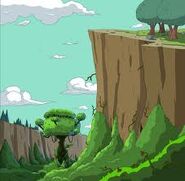 The cliff near the kingdom.
Community content is available under CC-BY-SA unless otherwise noted.
Advertisement