What Was Missing is the 10th episode of Season 3 of Adventure Time. It first aired September 26, 2011.

After their belongings are stolen by a Door Lord, Finn, Jake, Princess Bubblegum, Marceline, and BMO must open a door that will only open to a genuine band.

PB's Modelsheet for this episode 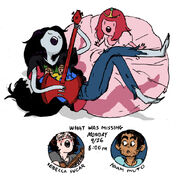 The modelsheet for The Door Lord

The Modelsheet for PB and Marceline singing together

Modelsheet for Punk Jake
Add a photo to this gallery
Retrieved from "https://adventuretimesuperfans.fandom.com/wiki/What_Was_Missing?oldid=32757"
Community content is available under CC-BY-SA unless otherwise noted.