Turtle Princess is Lumpy Space Princess's best friend (other than Melissa). Instead of hanging out with anybody, she'd rather read at the library where she works at. It is unknown of what Turtle Princess's kingdom looks like or where it is. She, as the rest of the other princesses, likes Finn for his heroism. She was one of the Princesses captured in "Loyalty to the King." Turtle Princess was also seen in the episode "Gotcha!," as LSP's best friend.Like lsp, she has a masculine kind of voice

But this looks like a prison. - "Loyalty to the King."

That is completely innapropriate. - "The Real You." 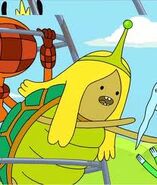 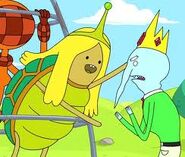 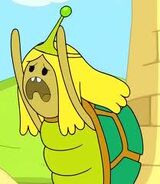 Add a photo to this gallery
Retrieved from "https://adventuretimesuperfans.fandom.com/wiki/Turtle_Princess?oldid=31751"
Community content is available under CC-BY-SA unless otherwise noted.