Trudy is a character that appears in "Freak City." She is a waist when she is introduced in the episode, but she's later transformed back to normal. Before Finn meets the freaks, Trudy and Kim hate each other. In her waist form, she is part of the "Super Freak" creatures that take on Magic Man. In the end, she decides to stay together with the other former freaks.

She has a thin body, she wears a full body suit that is a blue color and a red dot on top, only leaving her head bare. She has green wavy hair and has a glass dome over her head. 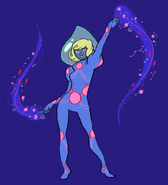 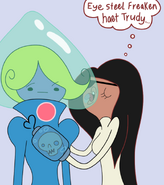 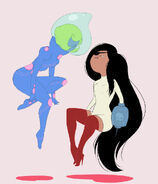 Add a photo to this gallery
Retrieved from "https://adventuretimesuperfans.fandom.com/wiki/Trudy?oldid=26461"
Community content is available under CC-BY-SA unless otherwise noted.