The Lich is an undead villain that first appeared in the episode "His Hero," where Billy punches him with The Gauntlet of the Hero Billy. His species is from the species known as Lich. Lich is a magical undead sorcerer that can cast many different spells to cast off foes. The Lich has the power to summon green flames from his hands. He gains his power from the Well of Power, which gives him his powers. It can also increase the power of his attacks, though, this hasn't been fully proven. He can also possess other people, however, this can be countered by wearing a tiara, a special sweater (such as Finn's Like Like Sweater) or anything that has a mystical gem that causes them to be "immune" to The Lich's possessive powers. His main goal is to remove all life from the Land of Ooo. In the episode "Mortal Folly," it is explained by Princess Bubblegum that Billy imprisoned Lich in a large amount of amber, but while Princess Bubblegum was explaining the story of The Lich to Finn and Jake, The Lich possess the waving hidden snail. The snail cracked the amber stone and set the Lich free.

In the episode "Mortal Recoil," The Lich possesses Princess Bubblegum after Ice King "accidentally" dropped her into the acid. The Ice King saw The Lich enter PB's body, but he doesn't know if it was really him because of his Wizard Eyes. After Finn got her loads of toxic chemicals, without Finn realizing, Bubblegum soon turned into a demon monster where Lich could get a good opportunity to remove all life from Ooo. But he was defeated and Princess Bubblegum was revived, but became 5 years younger in the process.

In the episode "In Your Footsteps," he is seen taking The Enchiridion from the bear, when he is possessing the Snail. In "King Worm," he is seen drinking coffee with Princess Bubblegum, where she tells Finn that adults are talking, making Finn freak out.

In the episode "The Lich," The Lich disguises as Billy and got Finn and Jake to help him create a portal to another galaxy. The Lich, as Billy, got Finn and Jake to steal all of the gems in the Princess crowns of Ooo. After they have all the gems, they put them in The Enchiridion, making the portal. Finn ended up destroying The Enchiridion, and The Lich, followed by Finn and Jake, went through the portal. More is revealed in the episode "Finn The Human," where The Lich wished for the extinction of all life. A being called Prismo granted this wish. Straight after The Lich wished for the extinction of all life, Finn wishes that The Lich was never born. This creates a different parallel universe. In the episode "Jake The Dog" (a continuation of "Finn the Human"), Jake changes the wish of The Lich. He wished that The Lich's wish was for Finn and Jake to go home. This turned everything normal.

He seems to have a very disturbing appearance, due to fact that he is dead. His skin has become extremely pale and part of the skin has been ripped away around the mouth area, causing him to have a permanent grin on his face. He is wearing a helmet that has two horns that resemble horns from a viking helmet. He is also wearing a grey/silver crown on his head. His eyes have green, soulless pupils or lights where his eyes should be, enhancing his already creepy appearance. His robe appears to be a dark greenish shade, this robe seems to cover the rest of his body. His arms are very boney, suggesting that the skin has rotted away and has left the bone to be seen by everyone. His legs are also very boney, this also indicates that he has been dead for a long time. He can cheat death. He is the greatest evil in Ooo.

Lich while he is using his magical powers

The Lich's reaction after Finn survived his attack

Waving snail, possessed by The Lich 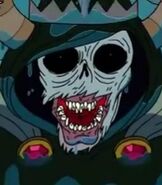 The Lich in water

The Lich's chest and up photo

The Lich having coffee with Princess Bubblegum

Half Lich half Billy

Add a photo to this gallery
Retrieved from "https://adventuretimesuperfans.fandom.com/wiki/The_Lich?oldid=31863"
Community content is available under CC-BY-SA unless otherwise noted.