The Farm is the main antagonist of "Who Would Win?" He seemed unbeatable at the start of the episode, being able to defeat many people just with his massive size and strength. He was defeated at the end of the episode by Finn and Jake, because they used cheap moves, taught to them by the Dream Warrior.

He has a white body. He has a mouth, and black spots for eyes. His head constantly hangs over his shoulders. He seems unable to keep it up. 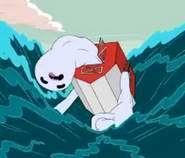