The Enchiridion! is the 5th episode of Adventure Time. It first aired on April 19th, 2010.

Finn and Jake are given a quest by Princess Bubblegum to journey to Mount Cragdor and find the book called The Enchiridion.

The episode starts with Finn and jake joining the party at the candy kingdom. When Princess bubblegum falls of her tower, finn catches her and PB says finn is a hero. Princess takes Finn to a secret spot and she tells Finn about a book called The Enchiridion (book).

Finn and Jake then go to a place where the book can be retrieved and they pass the 1st test by unlocking the gate going to the tower where the book is.

Finn and Jake find some gnomes and rescue them, but they destroy some old ladies but Jake puts them back to the place where they were stuck.

Finn feels bad for being responsible for the destroying of the old ladies, but jake tells him that the place is designed to mess him up. Finn felt better after Jake confronted him. 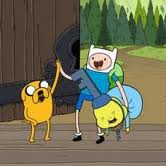 Finn and Jake lifting the Keyper
Add a photo to this gallery
Retrieved from "https://adventuretimesuperfans.fandom.com/wiki/The_Enchiridion!?oldid=32740"
Community content is available under CC-BY-SA unless otherwise noted.