Finn and Jake find a woman named Susan Strong, and must teach her about the joy of being above ground, but all goes wrong when she is addicted to candy, and tries to eat the Candy Kingdom.

Finn and Jake are taking off tree stumps by the demand of Princess Bubblegum. Jake then hits something that is hard and looked like tree stumps.

Finn then know that there is human living inside it and tries to help them to learn about the outside world. He takes a woman which he named her Susan Strong. Finn and Jake bring her to the surface of earth.

Susan was scared of the grass and Finn tells her that it can't hurt her. She then plays within the grass happily. Finn teaches Susan a lot of things about the surface world.

All of them then make a campfire in the forest. They are roasting the marshmallows. Finn then sing a song to Susan. Jake throws marshmallow into her mouth. She eat it and loves the taste. She tries to eat all of the marshmallows in the packet. Finn the decides to bring her to Candy Kingdom.

Susan meets Princess Bubblegum for a while. She asks Finn the is the candy, Finn replies that everything there is candy. Susan tries to eat Peppermint Butler but Finn prevent it and let her eat the pavement instead. She tells Finn that she will tell her friends about Candy Kingdom and eat all the candies there except Peppermint Butler. Finn tries to stop her but its too late.

Finn tells about what Susan is trying to do to Princess Bubblegum. She then brings them to the place where the weapons were kept but the weapons look harmless. She then tells Finn and Jake that she made all of candy people to look creepy but it makes them look very cute but their shadows are menacing. Susan and her tribes are on their way to Candy Kingdom. Finn gets an idea.

Finn cast a shadow on a large sheet at the front of candy kingdom. The humans are scared but Susan tells them that Shadow is harmless. Finn then tries to negotiate with them. Marshmallow kids with their bravery tell that they never back up and Jake accidentally puts them on fire. They accidentally burn the humans mask to reveal that they are Hyoomens instead. Finn gets confused and tell Susan who is she. She and her tribes run away.

Marshmallow kids stop burning and the gave their burnt part to Finn. Jake comes to Finn. Finn ask whether Susan is a wild animal or not and Jake tells that all of them are wild animal. 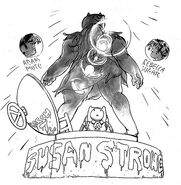 Promo Art for the Episode
Add a photo to this gallery
Retrieved from "https://adventuretimesuperfans.fandom.com/wiki/Susan_Strong_(episode)?oldid=32750"
Community content is available under CC-BY-SA unless otherwise noted.