Squirrel is a character from Adventure Time that appears in the episode "The Duke." He is first seen looking through a hologram and saw that Jake did not publish his letters which after he says "I-I hate you!" He is later seen in the episode trying to pass a letter too but fails which he then says "You son of a bleep-blop." At the end of the episode he teamed up with the Marquis of Nuts to try to avenge The Duke of Nuts. He disguses himself as "King Turtle," and when he reveales himself, he tells Jake "You remember me, Jake?" Jake replied "Nope." Then in a fit of rage, Squirrel made foam come out of his mouth and redness took over his eyes, he then attacked him. The Marqui of Nuts attacked both Finn and Jake. They most likely lost the battle. 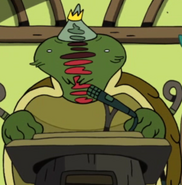