Space Angel Princess is a princess of an unknown kingdom. She makes a brief cameo appearance in "What is Life?" in Ice King's Imagination Zone. She appears in "Loyalty to the King" with an updated design as one of the princesses being held in Nice King's cage. She shouts "Nice King, I love you!" when she is in the cage. It is unknown if we will ever see the Space Angel Princess again.

Space Angel Princess is humanoid with purple-blue skin. She has a white bodysuit on that reveals her skin at the face, ears (though she has no visible ears), and stomach. There are light brown bands around her arms, legs, and neck. She wears brown boots with gray dots on them. She has a floating pale-yellow halo and wings of the same color.

In Space Angel Princess' earlier design, her wings and halo are a more opaque yellow and her boots are a tanner brown. Her body suit is a deep purple and only has a hole for her face. The bands on her suit and dots on her boots aren't in this design either. 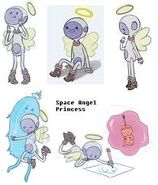 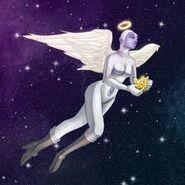