The sword somewhat resembles a tuning fork (which is ironic, due to its name). It also has a bright yellow aura surrounding it like sound waves, hence the name "Sound" Sword.

The Sound Sword harnesses the power of electricity and sound. When it is used, the sword releases a large sound wave that is capable of tearing apart and destroying anything in its path. It is also capable of knocking out its intended target temporarily. Lemongrab uses the sword on people who disobey his rules and who need "reconditioning." 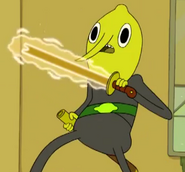