Slumber Party Panic is the very first episode of Adventure Time. It first aired on April 5, 2010.

When Princess Bubblegum's experiment fails and leads to a zombie infestation, the zombies head towards the Candy Kingdom. Now it's up to Finn to fix it.

Starchy is in the graveyard finding Princess Bubblegum bringing a bigger shovel because she needs it. And then he said "I will just wait for you here then. By the mauseoleum with my back turned and defenses lowered." Then, a candy zombie sneaks out of its coffin and he approaches Starchy. Starchy turns around and screams and he explodes.

Finn was surprised when he found out candy people explode by being scared. Princess Bubblegum tells Finn to royal promise her to not tell the candy people about the zombies. As Princess Bubblegum goes to her lab, Finn asked if he can tell Jake and Jake opens the door and says "tell me about what?" Finn nearly said about the outbreak of the zombies, but he covered his mouth. Jake askes what's going on. And Finn replies nothing at all and skips over Jake and acts like nothing happened.

At the party, Finn wants to play Truth or Dare with the candy people. The game goes on, until Jake mentions that what happened when you and Princess Bubblegum were alone together in the closet. And then Finn tries to prevent it by replied that he wants to play sock dodge. Jake says that Finn's sock smells like old Mr. Cream Puff. After that he tells Jake to play 7 Minutes in Heaven with Lady Rainicorn and when he puts them in a closet, Jake says that he will make Finn tell what is going on after he gets out of the closet. Finn replies that he can't hear Jake way up in heaven. Finn looks out of the candy window and sees the zombies coming. Chet said that he hears banging and he is scared. But Finn backs this up by putting on the music from the radio beside Chet and the candy people dance. Finn saw the zombies at the giant door then blocks it with a bench. Chocoberry asks what game does Finn play and Finn replies by saying that it's called blockado. The plan works but after that it seems to break. Manfried asks Finn something then Finn gets an idea. he gets taffy blindfolds from Taffy Girl and uses these to blindfold the candy people to play Hit the Pinata. Manfred suprised, But Finn said except for Manfried and Manfried relieved. All of the candy people got blindfolded and Finn starts collecting candy to the middle of the hall and the the candy zombies get in. Finn said "Smash the pinatas!" and everyone starts smashing the zombies and eat whats inside it.

After it's over, Jake gets out of the closet and ask what happened and Finn broke the promise and tells Jake what happened. All of the sudden, everything goes blue and everyone was frozen. Princess Bubblegum comes out of her lab and asks Finn if he broke the promise, and he replies yes, Princess Bubblegum then replies that you can't break it at any cost.

In the lab, Princess Bubblegum thinks about the answer of the last serum. She gets the answer and explains that she is too smart to see such simple answer. She puts the final ingredient to the serum and revives the dead zombies. Jake says to Finn that Finn should say that he made a royal promise because he knows what is it. Princess Bubblegum talks to Finn and said that hope he understands the full consequences of a royal promise. Finn then said about everything that happened in the event. Princess Bubblegum then says to Finn that he's cute. Starchy bite Finn's leg and Finn then hold Starchy. Starchy said don't squeeze him and then Finn squeezes Starchy and he Farts. The episode ends.

The Candy Citizens ready to beat up the "pinatas"

And Cheat Death itself! 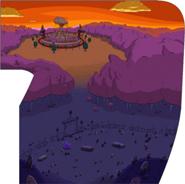 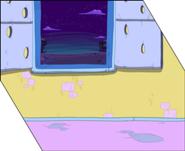 Zombie Finn (inside the circle)

Add a photo to this gallery
Slumber Party Panic/Gallery
Retrieved from "https://adventuretimesuperfans.fandom.com/wiki/Slumber_Party_Panic?oldid=32736"
Community content is available under CC-BY-SA unless otherwise noted.