Slime Princess is the princess of an unknown kingdom. She is a blob of slime and wears a tiara very similar to Princess Bubblegum's tiara but with a green gem. She appears to have a crush on Finn in "Prisoners of Love," until the end of the episode when Jake tells her that Finn constantly "wets his pants." She is the first of the many Princesses to fall for the Ice King's mistaken identity in the episode "Loyalty to the King." She is also seen kissing a crocodile in "Video Makers" for Finn & Jake's Movie.

She is dull gold and green blob with a crown. Her crown is yellow with a green gemstone on top. It looks very similar to Princess Bubblegum's. Her arms are small and tiny. 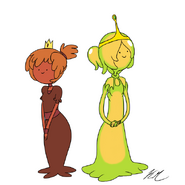 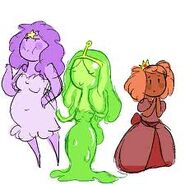 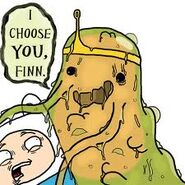 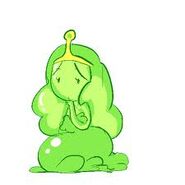 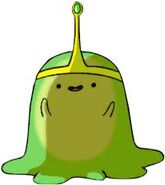 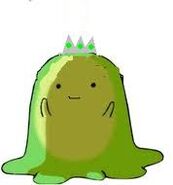 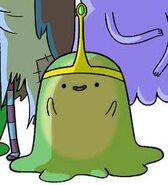 Add a photo to this gallery
Slime Princess/Gallery
Retrieved from "https://adventuretimesuperfans.fandom.com/wiki/Slime_Princess?oldid=31749"
Community content is available under CC-BY-SA unless otherwise noted.