Sir Slicer appears in "Blood Under the Skin," as a man who makes epic appearances and has tons of time on his hands. Throughout the episode, he follows Finn getting embarrased at the challenges Finn goes through to aquire the Armor of Zeldron. Everytime he appears, he makes a repeated dramatic entrance always riding a pink horse. At the end of the episode, Finn makes fun of Sir Slicer for having nothing better to do all day, but to follow a kid around in the woods to make fun of him. At this, Sir Slicer gets embarassed and falls off his horse, because his armor is too heavy. 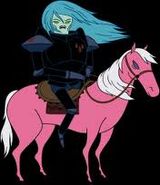 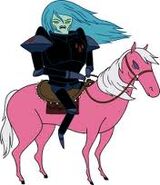