Simon Petrikov is the character Ice King used to be until he put on the ice crown. He appeared in the episode "Holly Jolly Secrets Part 2," in Ice King's video diary. He has a fiancee named Betty, but she left Simon as soon as he put on the crown. It is unknown what he did when he first had the crown on. Finn, Jake and BMO were the ones to see the video diary. He lives in Russia, the largest country in the world, and lived in the European part of the country. In the episode "Beyond This Earthly Realm," Finn calls Ice King Simon, and in the episode "I Remember You," Marceline calls him Simon. As revealed in "I Remember You," Marceline and Simon had a friendship, and Simon treated her like his own daughter. Simon was already mutated when he met Marceline, and this was after The Great Mushroom War. He gave Marceline her favorite thing in the world, the teddy bear, Hambo. 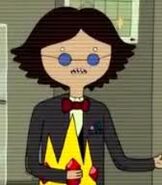 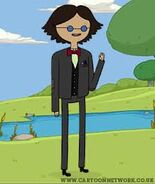 From the episode 'Finn the Human'
Community content is available under CC-BY-SA unless otherwise noted.
Advertisement