Start a Wiki
Shelby is an earthworm who lives inside Jake's Viola. He makes his first appearance in the episode "My Two Favorite People," where he was talking to Jake about his spending time with both Lady Rainicorn and Finn at the same time. He made another appearance in "Video Makers." He was also seen in the episode "Holly Jolly Secrets Part 2," where he was the announcer for all the characters who were sitting around BMO, who was playing tapes. He appears again in "Mystery Dungeon," after he is knocked out by Ice King along with Earl of Lemongrab, NEPTR, and Tree Trunks. Ice King stated he was going to be bait for the Sea Monster, but instead Tree Trunks was.

He is an earthworm, so he is pink all over his body and has a lump on his neck area. His face is simple, like most Adventure Time characters.

Why don't you hang out with them at the same time? - "My Two Favorite People"

Why are you lookin' so down in the dumps? - "My Two Favorite People"

You can just call me Shelby. - "Video Makers"

And so it was decided... that once every year when the weather got chilly, that Finn, Jake, the Ice King, BMO, Princess Bubblegum, Marceline the Vampire Queen, Cinnamon Bun, Peppermint Butler, Phil, a candy cane man, one of the gumdrop girls, Lady Rainicorn, Lumpy Space Princess, that guy, the other guy, the pig, Tree Trunks, a two headed duck, the old crazy Tart Toter, the punchbowl, a booger, and Gunther... Would get together while wearing really big sweaters and watch videos on the floor next to a fire... to celebrate the day when Finn and Jake had a fleeting moment of empathy for the biggest weirdo in Land of Ooo. It was a miracle. Good night - "Holly Jolly Secrets Part 2" 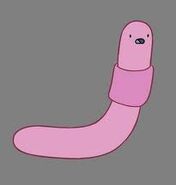 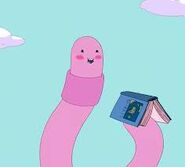 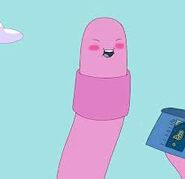 Add a photo to this gallery
Retrieved from "https://adventuretimesuperfans.fandom.com/wiki/Shelby?oldid=31901"
Community content is available under CC-BY-SA unless otherwise noted.