The Root Sword was Finn's second main weapon which replaced the Golden Sword. This sword made its first appearance in the episode "Mystery Train," where Finn obtained it inside the train. He used it to fight the Conductor (which was really Jake), which the fight led to destroying the train's main controls. Finn was going to kill the Conductor, until he transformed into Jake. As of the episode "Dad's Dungeon." This sword is currently replaced by the Demon Blood Sword. It is unknown if the sword was left there or kept as a back up.

The sword seems to be a blade connected to a root. The root handle is made out of 2 roots that wrap around each other and hold the blade. 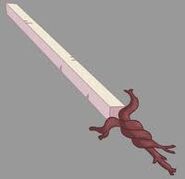