Raggedy Princess is one of the more common minor princesses in Adventure Time. Her first appearance was in the episode "Prisoners of Love," with the other 6 princesses that Ice King kidnapped. It is uncertain if Raggedy Princess rules a kingdom or not, but she does work for Tree Trunks as a scarecrow, as revealed in "Apple Thief." Though she has no hands, she can somehow stitch things together, as she did when she and other unnamed princesses made Finn a new backpack after his old one was ripped by a skeleton possessed by the Lich in the episode "Mortal Folly." Raggedy Princess, like many other princesses, has a crush on Finn.

Raggady Princess is made out of odd things such as threads and textiles. Her mouth is stitched together and she has no arms. Raggedy Princess also has mismatched legs and a shard of glass as a crown. 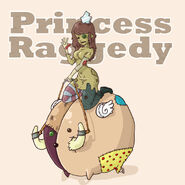 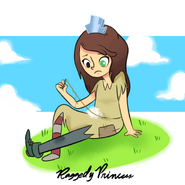