Purple Princess isa a character that makes cameo in "What Is Life?" In Ice King's imagination zone. She also appears in "Loyalty To The King" as one of the person who meets 'Nice King'.

She wears a purple dress. Her arms and legs have purple stripes, and she has a few leaves coming out of the top of her head and her neck. Her hair is cut short into a bob. 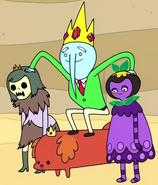