Princess Princess Princess is a princess with five heads, all with different faces and tiaras. One of the heads also appears to be possessed or is a monster of some kind. That head's tiara also looks very similar to Princess Bubblegum's tiara. Princess Princess Princess appears in Ice King's imagination zone in "What is Life?" and as one of the many princesses to appear in "Loyalty to the King," where she bumped into Finn and said they were heading to meet with the Nice King. 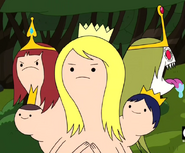 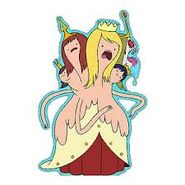