Princess Bubblegum (More commonly known as PB) (Full Name: Princess Bonnibel Bubblegum) is the ruler of the Candy Kingdom. She is super smart and super pink. This character was Finn's crush, but now he is interested in a much "hotter" girl whose stolen PB's place. She can be very nice, but very mean when she is mad. Her hair is made out of bubblegum. She is shown to be somewhat strict during her princess duties, but when she's hanging out with her friends, she is casual. PB is sometimes in events that she has to attend to like the Wizard Battle. The winner would receive a kiss on the lips by her. PB usually uses science to help out Finn & Jake on their adventures. Princess Bubblegum's secrets are troubling her when certain events happen, so she ask Finn & Jake to do something about it. She does seem to care about Finn at the end of the episode "Burning Low." She is seen in "King Worm" having coffee with The Lich. In "Lady & Peebles," it is revealed that she is pretty strong, and knows how to fight, evidenced when she beat up Ricardio.

She has light pink skin and pink hair, with a gold crown that has a turquoise gemstone at the top. The crown protects her from The Lich and his evil powers. She is entirely made of bubblegum, even her hair, as shown in

"To Cut A Woman's Hair."She is one of the few characters along with Marcelline to change clothes a lot. 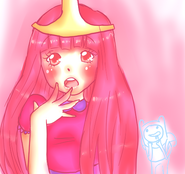 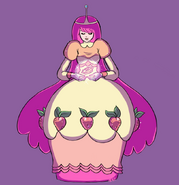 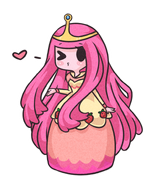 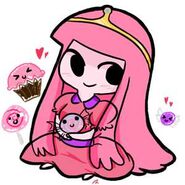 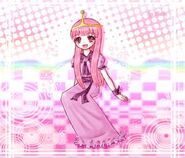 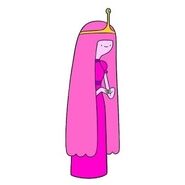 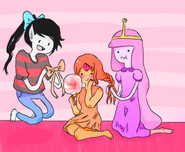 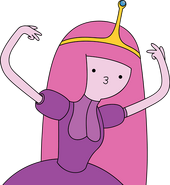 Retrieved from "https://adventuretimesuperfans.fandom.com/wiki/Princess_Bubblegum?oldid=32322"
Community content is available under CC-BY-SA unless otherwise noted.