Power Animal is the 33rd episode of Adventure Time and the 7th episode of Season 2. It first aired on November 22, 2010.

After Finn and Jake have a party, Finn oddly goes missing the next day. Jake has to solve the crime and find Finn, but can't focus enough to do it. 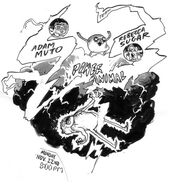 Promo Art for the Episode
Community content is available under CC-BY-SA unless otherwise noted.
Advertisement