The Pig was Finn's main force inside the game Card Wars, and appeared in the the episode of the same name as the game. Finn flooped the Pig twice in order to destroy Jake's corn fields, decimating his entire army. Finn revived the Pig once with the Ancient Scholar, and later got him stuck on purpose when he sent it out to attack the Wandering Bald Man. 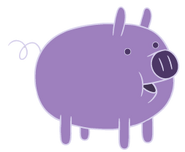 Finn flooping the pig
Add a photo to this gallery
Retrieved from "https://adventuretimesuperfans.fandom.com/wiki/Pig_(Card_Wars)?oldid=26474"
Community content is available under CC-BY-SA unless otherwise noted.