Penny is a character that first appeared in the episode "City of Thieves." She is a humanoid because her cheeks are too big for her face. She has been subjected to the City of Thieves, and thus became a thief herself. She uses her innocent-looking self to trick Finn and Jake, but since Jake stole from the Baskets & Boots store, he wasn't of much assistance. She is mostly seen on Finn's head during the episode.

My basket! That's my basket! - "City of Thieves" 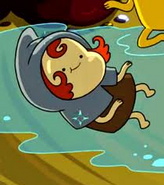