Old Lady Princess is one of the many princesses being kidnapped by Ice King as usually. But Old Lady Princess was going to marry Ice King in the episode "When Wedding Bells Thaw." When Ice King tells Finn and Jake that he is getting married, she is seen riding in a wagon with a bunch of female Penguins, who were supposedly taking her to her bachelorette party. She was cursed by an engagement ring given to her by the Ice King. The ring was spiky, magical, made of ice, and it tricked her into thinking she was in love with Ice King, which was not the case. She was then freed from the curse at the wedding, where Jake took off her engagement ring. Then the Ice King accidently married Jake instead.

Her body had many wrinkles. Her crown is golden and spiky with a blue bow on it. Her hair is lavender and her dress is purple with another blue bow on it. While she was possessed by The Ice King, her eyes were huge, but they are generally quite small. 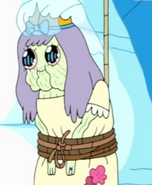 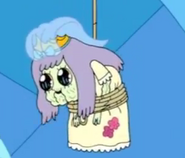