Morituri Te Salutamus is the 2nd episode in Season 3 of Adventure Time. It first aired July 18, 2011. The name of the episode is in Latin, and all the ghosts in the episode speak Latin as well.

Finn and Jake must defeat the Fight King's Gladiator Ghosts, but all goes wrong when Finn becomes mind-controlled by Fight King.

Finn and Jake then spotted a big arena and go there to see what it looks like in the inside. They find Fight King, who is sitting on his throne. He tells them to fight but they know its a trap so they go away.

Outside the arena, walking, Finn and Jake are telling about what will happen if they fight. Finding that the consequences is interesting, they go to the arena and accept Fight King proposal.

Finn and Jake fight a pair of gladiator ghosts and win. Fight King give them a prize then put them underground so they can prepare for the next fight. Finn tells his plan to Jake on how they will escape the arena, but Jake made another plan. Finn agrees with Jake's plan

While Finn is fighting, Jake is making an underground tropical island while singing. Finn finishes a fight and Fight King give him a prize.

Finn gets back into underground and make another fake Jake. He then goes to fight in the arena and Jake is still making a tropical island.Finn gets possessed by Fight King who tells Finn to kill 'Jake'.

After a while, Jake gets bored and decided to see what Finn is doing. He is surprised to see that. Finn tries to attack him and he prevent it by using Stretchy Powers.

After struggling to get out of Jake's knot, Finn tell Fight King that he can't kill Jake because the sword he is using is too small. Fight King then give Finn his sword and Finn destroy it by throwing it to the ground. 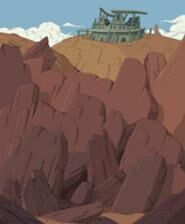 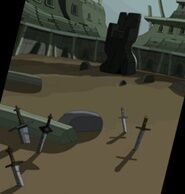 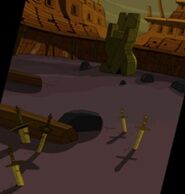