Mini Queen is a character who appears in "His Hero" and in Ice King's Imagination Zone in the episode "What is Life?." Near the end of "Loyalty to the King," she can be seen in an aerial view when Jake is using his ear-shield to push through the princesses. She is, as her name suggests, a tiny queen.

She appears to have both human and insect characteristics. She cannot speak loud or clear enough for people to understand, but can write notes using her antennae.

In "His Hero," she is inexplicably abducted by the Swamp Giant, being kept amidst the mushrooms on his head before she is rescued. She leaves Finn a note asking him to call her before leaving his care. Billy claims that she is "already kidnapped by another monster" or "probably dead," but this seems unlikely as he has little basis for this and turned out wrong on the same subject later (though it was revealed in the episode storyboard that she was kidnapped by goblins shortly after being rescued).

Mini Queen rules Littleland, which has not been seen in the series. In "What is Life?," she appears next to Laurel Princess and Lizard Princess, making a tiny cameo appearance.

She has a ladybug-like body and her wings are pink. Her skin is brown. Her hair is in a bob style and she has rosy cheeks. She has a gold crown with small red stones on top. 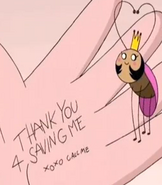 Mini Queen is at the top next to Purple Princess
Community content is available under CC-BY-SA unless otherwise noted.
Advertisement