She is the only Lumpy Space Person who has full eyes and eyelashes instead of dots. She has a purple spot in the center of her face and is relatively pink with red cheeks. She is the same shape as LSP, except she has a swirl on her forehead that looks like her "hair style." Like most Lumpy People, she does not have a symbol on her head. 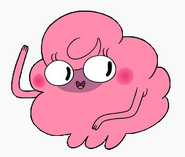