The Marshmallow Kids were first seen in the episode "Susan Strong." They ran towards Susan's Tribe, but accidently caught on fire from the wax paper, trying to protect the Candy Kingdom. This act scared off Susan Strong and the Hyooman Tribe.

They are white marshmallows, with black eyes. They have a layer of skin, as shown when they ripped off their skin to reveal their body. They are gooey when they don't have skin, and the skin seems to regenerate, due to them saying "We'll just be gooey for a while." 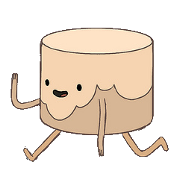