Marquis of Nuts is the first son of Duke of Nuts and Duchess of Nuts. He appears in "The Duke." He tries to avenge his father by putting up a disguise at the Grand Meeting of Ooo Royalty to attack Finn and Jake. He made a cameo in "Henchman."

He has tan-colored skin, brown eyes and brown hair. He wears a red cape, brown shoes, and a peanut shell as a mask (or armor). He is just a single nut on the bottom half of the peanut shell. 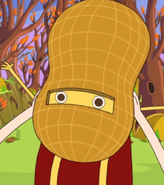 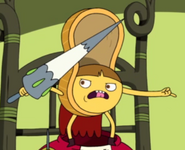