Margaret is married to Joshua and the mother to Jake and Jermaine. She and Joshua adopt Finn when they find him with a leaf stuck to his butt, as shown in "Memories of Boom Boom Mountain." A picture of her can be found in the episode "Memory of A Memory." She was mentioned in the episode "Conquest of Cuteness," where Finn and Jake state that she always had the right thing to say.

In the episode "Jake The Dad," it is revealed that Margaret made a video for Jake, about how to raise his children, when he has them.

She looks like Jake and Joshua except she has huge eyelashes and wears a light blue and purple earrings with an orange hat with an assortment of colors. 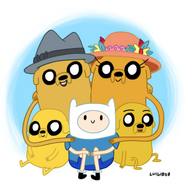 Add a photo to this gallery
Retrieved from "https://adventuretimesuperfans.fandom.com/wiki/Margaret?oldid=32674"
Community content is available under CC-BY-SA unless otherwise noted.