Start a Wiki
The Mother/Father of Marceline and/or Marshall Lee is unknown in the show. There are a few photos of her but no appearances yet. She was mentioned in the episode "Henchman, " where Marceline says that her mother would help her whenever she got hurt, her mother always patches her up as Marceline stated. In the episode "Return to the Nightosphere," there is a picture of young Marceline and her dad standing on the right and another women standing on the left. The other women looks extremely similar to Marceline, so she is presumed to be her mother. 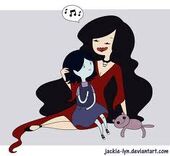 Add a photo to this gallery
Marceline & Marshall Lee's Mother/Gallery
Retrieved from "https://adventuretimesuperfans.fandom.com/wiki/Marceline_%26_Marshall_Lee%27s_Mother?oldid=29236"
Community content is available under CC-BY-SA unless otherwise noted.