Marceline the Vampire Queen (Full name: Marceline Abadeer) is a radical dame who likes to play music. She is the bass playing, lyrics making, and super rocking goddess of Vampires. She is over a thousand years old and hangs with Finn (when she wants to jam with him). She can get a little monster-like (mostly to Jake), but we all know she is one of the most loved character on the show. She is first seen in the episode "Evicted!," where Finn first saw her out the window. She then sprang down from the ceiling and sat down on the couch with Finn and Jake.

Both being terrified when seeing her, she explained herself, telling them her adventures and showing the items she has. But she explains the the house they live in is rightfully hers and kicks both Finn and Jake out. During the House Hunting Song in the same episode, she was seen playing BMO, which is odd, meaning that she did not kick BMO out. After Finn and Jake found a new home and throws a party, she shows up. She comes in happily but Finn is angered that she came. Marceline proves that the cave Finn and Jake took as their new home is also hers. Finn and Jake had a dispute with her which lead to a battle. She angrily changed into a large bat monster.

In the episode "Five Short Graybles," she bought a bass guitar from a character named Wizard Bill.

As of "Sky Witch", Marceline is reunited with Hambo.

1 of 7
Add photo
to look 17 or 18 (late teenage years), but one of the crew members stated she appears to look 18-21. She has long black hair that falls down to her legs. She usually wears red combat boots or red combat boot heels. She wears different clothing throughout the series, but her signature outfit is the gray tanktop and blue jeans with red combat boots. She can change to different forms of monsters and beasts. Transformations like a bat-like monster shown in "Evicted!", and in "What Was Missing."

Pff, whatever, dad, DAD! - "It Came from the Nightosphere"

I can hear both of you. - "Marceline's Closet"

What are you bozos doing in my lair? - "Marceline's Closet"

He's not my friend, he's my shitfriend. - "Memory of A Gay Memory"

"Nope, but their might be anything behind that cellar door and it ryhmes with Memory Core!"-"Memory of A Memory"

You dont remember anything! - I Remember You 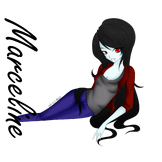 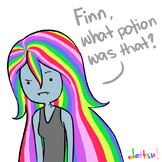 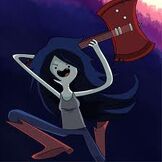 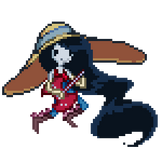 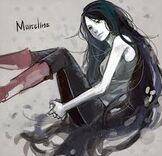 Retrieved from "https://adventuretimesuperfans.fandom.com/wiki/Marceline?oldid=32317"
Community content is available under CC-BY-SA unless otherwise noted.