Manfried is a piñata that spends his time hanging in the main hall of the Candy Castle. He has a monotone voice, more of an emotionless tone. Manfried was first seen in the episode "Slumber Party Panic." In this episode, Manfried shows that he is rightfully afraid of being smashed when Finn tells everyone that they are going to smash some piñatas (zombies). He also appears in the episodes "What Have You Done?" and "Too Young" as a type of intercom system for Princess Bubblegum's Castle Alarm System.

He is a red and green striped color, he also has paper like hangings on his body. His mouth is a peach color and his eyes are large with pupils.

All present and accounted for. - "Slumber Party Panic" 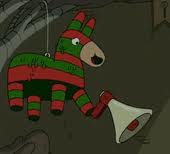 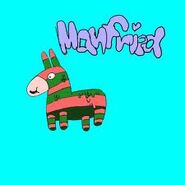