The Magic Man is the antagonist in the episodes "Freak City" and "Sons of Mars." He disguises himself as a beggar, and turns travelers who help him into body parts until they learned a "valuable lesson." However, the lesson that he teaches those who help him is to "appreciate how much of a jerk I am (Magic Man)." In "Freak City," he turns Finn into a giant good smelling foot and Finn, after teaming up with the other victims of the Magic Man, learns the lesson that Magic Man wanted him to learn all along. Magic Man is very powerful, and his powers include, transformation of body parts, teleportation, portals, rapid healing, and various cantrips. Since Magic Man seemed to only be toying with Finn and the others, it is assumed that he has other un-revealed powers. He is the antagonist of the game "Jake's Tough Break." In "Sons of Mars," it is revealed that he had a former lover, Margles, who mysteriously died. It is also revealed in the episode that he is Grob Gob Glob Grod's little brother. He is more than 200 years old and a former inhabitant of Mars. He lives in a house. It is also revealed in the episode Sons of Mars that he has crimes against Mars. He did (although there is no evidence of this, as stated by Grob Gob Glob Grod) the plague of shadows, where shadows came to life and attacked people, he glued people's hands together, and he cursed the water into hair, and some drank it, and turned bald. He is voiced by Tom Kenny, the same voice actor as Ice King. His latest appearance was in the episode "All The Little People," when he gave Finn the sack of little people at the beginning of the episode.

He is a green skinned magic user who wears yellow tattered clothes with mismatched red and purple boots. He also has a pointy yellow hat with a blue ribbon wrapped around it.

"Not until you appreciate how much of a jerk I am!" - "Freak City"

I just gotta wait until they kill your friend!- Son of Mars 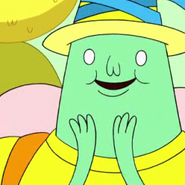 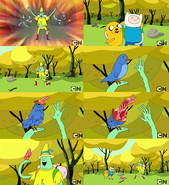 A Clear Look Of The Magic Man

Magic Man's magic powder spelling "Eat It"
Add a photo to this gallery
Retrieved from "https://adventuretimesuperfans.fandom.com/wiki/Magic_Man?oldid=32318"
Community content is available under CC-BY-SA unless otherwise noted.