She is attached to her husband. She has dark purple-brown burgundy hair, and a golden star on her forehead and she also wears a tiara that has small aqua gem.

In her older design, she did not wear a tiara and her hair was very messy. 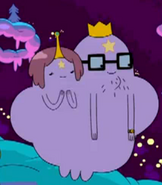