Lumpy Space Prince is the gender-swapped version of Lumpy Space Princess. He seems to look exactly like her, but with a mustache and a bit darker than him. His only appearance was in "Fionna and Cake," but he has no lines, he only drank from a cup in a single scene. He appeared again in the episode Bad Little Boy where he threw a party.

He looks like a large purple cloud with arms. He has a star on his forehead like LSP, the actual only difference between her and him is the line mustache on Lumpy Space Prince's face. 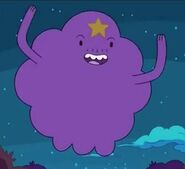 Add a photo to this gallery
Retrieved from "https://adventuretimesuperfans.fandom.com/wiki/Lumpy_Space_Prince?oldid=31893"
Community content is available under CC-BY-SA unless otherwise noted.