The Land of Ooo is the continent and the setting of Adventure Time. Almost every single character lives in the region of the map. Finn and Jake have been to many of the places here.

The Grass Lands, also known as Verdant Plains, is an area near the center of Ooo. It is home to the Tree Fort which is home to Finn and Jake. The land is a very grassy area filled with hills. The Hot Dog Kingdom can also be found in the Grass Lands, along with many other kingdoms, such as Wildberry Kingdom. Stanley's house is in the grasslands as well as the Jiggler's cave.

The Ice Kingdom is located north at Ooo. It is home to the Ice King, Gunther and others. It is filled with snow and ice mountains.

It is an area covered with sand and skeleton remains of large fishes. This place also lies the Royal Courthouse, where all royalties join together. This place also has the MO factory, where BMO was made. The Bad lands is located at the southern part of Ooo and is home to many bandits and other evil beings.

The Burning Lands is located near the Bad Lands. It is full fire and lava. It is home to the Fire Kingdom where Flame Princess lives as well as other fire elemetal.

This place is near the Ice Kingdom. It is home to Marceline. It is covered with red sand and skeletons, as well as ruins of old buildings because of The Great Mushroom War. 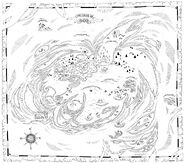 Add a photo to this gallery
Retrieved from "https://adventuretimesuperfans.fandom.com/wiki/Land_of_Ooo?oldid=31802"
Community content is available under CC-BY-SA unless otherwise noted.