Lady Rainicorn is a colorful character of the show. She speaks Rainicornian (Korean) and is in a relationship with Jake. She has a long body, and she can fly. She has made multiple appearances on the show, making her one of the eight main characters. She first came out in the episode "Slumber Party Panic" where she was seen with Jake twice. In the episode "My Two Favorite People," she was given a Universal Translator, so that Finn could understand what she was saying. In the episode  "Her Parents," Jake is worried that Lady's Parents will hate him because he is a dog, so he disguises himself as a Rainicorn using Stretchy Powers. In the episode "Lady & Peebles," it is revealed that she is pregnant with Jake's children. These are the Rainbow Pupsters, which she gives birth to in the episode "Jake The Dad," although it never shows her actually giving birth. Lady is friends with Princess Bubblegum, and is technically her pet, but they still have a strong friendship.

She has a very long body, which is multi-colored. She has a long and pointy white horn on her head and a thick blonde mane running across the first half of her body. She has small legs and small arms. She also has similar eyes with Jake. Lady Rainicorn's body is medium long, probably because Bob, her father, has a very short body and Ethel, her mother, has an extra-long body. 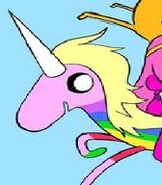 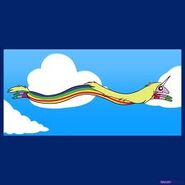 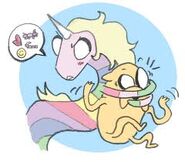 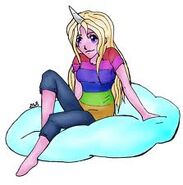 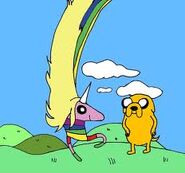 Add a photo to this gallery
Lady Rainicorn/Gallery
Retrieved from "https://adventuretimesuperfans.fandom.com/wiki/Lady_Rainicorn?oldid=31721"
Community content is available under CC-BY-SA unless otherwise noted.