Key-per appeared in the episode "The Enchiridion!." He was the beginning clue of Finn's quest. Key-per's appearance might have a connection to the Door Lord from "What Was Missing." When Finn was at the last clue of his quest, Key-per appeared again. Finn punched him, thinking he was a evil creature. But Key-per explained that the reason he was wearing his devil pajamas was because he was getting ready for bed. 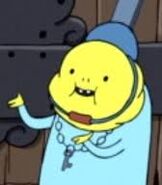 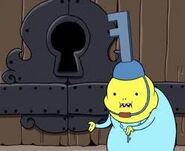 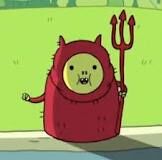 Add a photo to this gallery
Retrieved from "https://adventuretimesuperfans.fandom.com/wiki/Key-per?oldid=23079"
Community content is available under CC-BY-SA unless otherwise noted.