Jake must kill Wildberry Princess, as the assassin Me-Mow is threatening to kill him if he doesn't, but Finn will not allow it.

As soon as they leave Jake starts on another pie, but there is a little kitten in the pie. The kitten hisses at Jake then revealed herself as Me-Mow, a 2nd Class Assassin of the Assasinist Guild, and said She has come to kill Wildberry Princess. Jake tells him that he is not Wildberry Princess, and Me-Mow states that She knows this and tells Jake She will poison Him if He doesn't kill Wildberry Princess and she will not give him the antidote unless he kills Her. 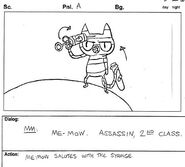 A storyboard from the episode
Community content is available under CC-BY-SA unless otherwise noted.
Advertisement