Jake's Sword is a weapon used by Jake that is first seen in the episode "Tree Trunks." He was holding it while saying 'no' loudly while balancing an apple on his head. He was probably holding it because him and Finn were cutting apples with their swords. It was later seen in the episode "Conquest of Cuteness," where the Cuties tried to take it. Although, Jake hasn't been seen using his sword, he might never use it again, due to the fact that Jake is much better off with hand-to-hand combat and his Stretchy Powers.

The blade has a very long handle. The handle is brown and has a skull on the bottom. The center is purple and has a red, yellow and black eye. The actual blade part is very sharp, and on one side there are jagged spikes. 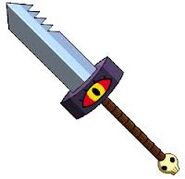 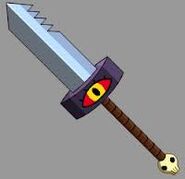 A Modelsheet of the sword
Community content is available under CC-BY-SA unless otherwise noted.
Advertisement