Jake's Phone appears in various episodes. In the episode "Return to the Nightosphere," he got a new flip phone that could record video and take pictures. In the episode "Too Young," Jake used a phone, but it is unknown which phone it was. It is a green phone with many buttons, a soda can on the back of the phone and headphones attached so only the person speaking can hear the conversation. In "My Two Favorite People," it is revealed that Jake has many contacts on his phone. 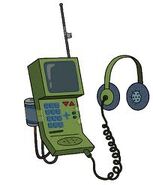