Jake the Dog is a super fun character on the show. He is the adoptive brother of Finn and has amazing Stretchy Powers. Being the second main character or deuteragonist, he has shown a variety of his powers and relationships with people. Like how Finn is his brother/best friend, or how Lady Rainicorn is now part of  his new family. Although Jake can sometimes forget things, he is still a trustworthy companion. He can also stretch into a cheetah and disguise himself as another person by stretching, he can also imitate Finn's whole body. Sometimes, Jake can be very lazy in certain situations. he also loves ice cream. He invents mixed foods into the "Everything Burrito," "Ice Cream Pizza" and "Bacon Pancakes." He is a dog, so he will get very sick if he eats chocolate, but he was seen having chocolate cake in "Mystery Train."

He seems to still have a fear of vampires. This is proven when Jake and Finn first meet Marceline, the Vampire Queen. Though after a while, he loses his fear and befriends Marceline. His favorite food is ice cream, which comes from the episodes "Business Time" and "The Pods." In the episode "Business Time," while the business men are working at the Tree Fort, Jake can be seen in the background eating loads of buckets of ice cream, and in "The Pods," he wants to go in a Ice cream marathon, and also The third Pod contains self regenerating ice cream, which Jake can't seem to stop eating.

In the episode "Death in Bloom," he lost his memory when he drank from the River of Forgetfulness. In the episode "Lady & Peebles," it is revealed that his girlfriend, Lady Rainicorn, is pregnant with his baby. These are the Rainbow Pupsters, which Lady gives birth to in the episode "Jake The Dad." After the birth, Jake moves in with Lady, but the Pupsters age really quickly and within two days they are grown up enough for Jake not to live with them.

Nah man, my smell is like 10 times better than yours. - "The Chamber of Frozen Blades"

Gunter's a woman?! - "The Chamber of Frozen Blades"

That sounds ominous... I don't like it! - "The Chamber of Frozen Blades"

Shut ya face. I came back for the music. - "What Was Missing"

If I had a penny for every time someone went crazy, hopped up on magic energy... I'd be Abraham Lincoln! "Crystals Have Power"

Nothing evil could be this adorable. - "The Pods"

Man, who cares if it's honey, you stink anyways. - "Hitman"

I feel like I could touch the heavens... And sock angels. - "Hot To The Touch"

What's your deal screwie?! I'm really sleepy and your creepin' me the math out! - "The Eyes"

You guys are hacks! talentless hacks! I quit the band!  -"what was missing"

"If you werent a figment of my imagination I'd wanna have yo baby...what you laughing at?! - "Rainy Day Daydream"

"Love you everything burrito" - "Conquest of Cuteness"

Na, we are more like cops! Crooked cops! -The Duke 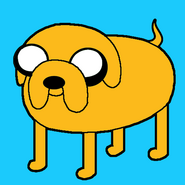 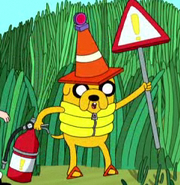 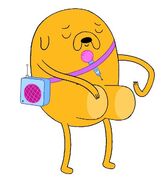 Add a photo to this gallery
See More Here ----> Jake/Gallery
Retrieved from "https://adventuretimesuperfans.fandom.com/wiki/Jake?oldid=31781"
Community content is available under CC-BY-SA unless otherwise noted.